Dubbed as Bio-Tech Olympics 2012, this year’s event combined the American reality game show, Survivor, and Hollywood box-office hit, The Hunger Games, concepts to include sweat-drenching and mentally-exhausting challenges that was sure to renew camaraderie and team spirit among our Pest Control Professionals. 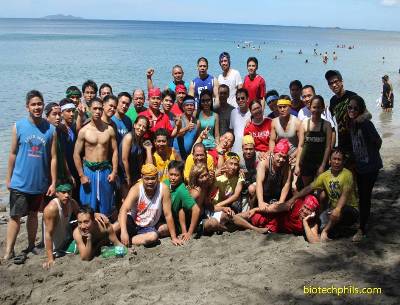 The 2012 Bio-Tech Environmental's annual outing was held in Nasugbu, Batangas

Each team’s strength and stamina was put into tests in the second day with eight games at stake. The muscle-ripping tug-of-war was first in the line. Then, there’s the water relay, sack race, “Yamashita’s treasure”, sand wrestling, “Ano ka Hilo?!”, “Catch the Dragon’s Tail”, and swimming contest. After all the energies were drained, it was the Red Tributes who triumphantly garnered the highest cumulative points and therefore laurelled champion of the Olympics.

The whole excursion had been once again able to strengthen the camaraderie among Bio-Tech Environmental’s personnel – this time, the harder way. But most importantly, it was a time to relax and simply have fun in the sun. As the saying goes, “All work and no play makes Juan a dull boy.”

And for the grand finale? Well, with all their uniting efforts, they just carried the Head Gamemaker Don Johnson Neri (Quality Assurance and Technical Services Entomologist) and splashed him into the water.

It was indeed an event to remember.  Everyone looks forward to more trainings, activities and outings.  Go Green!  Go Bio-Tech Environmental!