After undergoing rigorous training sessions in the Pest Management Academy (PMA) and passing the examination, it was time to acknowledge the hard work of the Bio-Tech pest control technicians and employees. Last August 3, 2012, a PMA Graduation was held at Jade Palace, Shaw Blvd, Pasig City.  Everyone was awarded with a Certificate of Completion and a special incentive was given to the Top 10 Graduates. To cap off the graduation ceremony, an inspiring speech was given by the Top Graduate among the technicians. 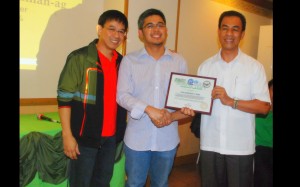 After enjoying the scrumptious dinner, it was time for the first formalized Bio-Tech Environmental General Assembly.  First on the agenda was a State of the Company Address (SoCA) by Hector Binwek. The Mission, Vision and Core Values of Bio-Tech were reviewed to remind everyone of the company’s guiding principles. It was followed by a brief per zone overview by the Area Managers to give everyone updates as to where the company stands.

After the presentation and overview, the new HR Officer presented the memos that were released and the reason behind these imposed rules. It was followed by an Open Forum to hear both sides. For every issue raised, it was closed with a resolution. At the end of the night, every issue was addressed and settled amicably.

It was a productive night for Bio-tech Environmental Philippines pest control professionals.  It was a night of acknowledgement and an opportunity to re-group as we continue on to the last four months of fiscal year 2012.